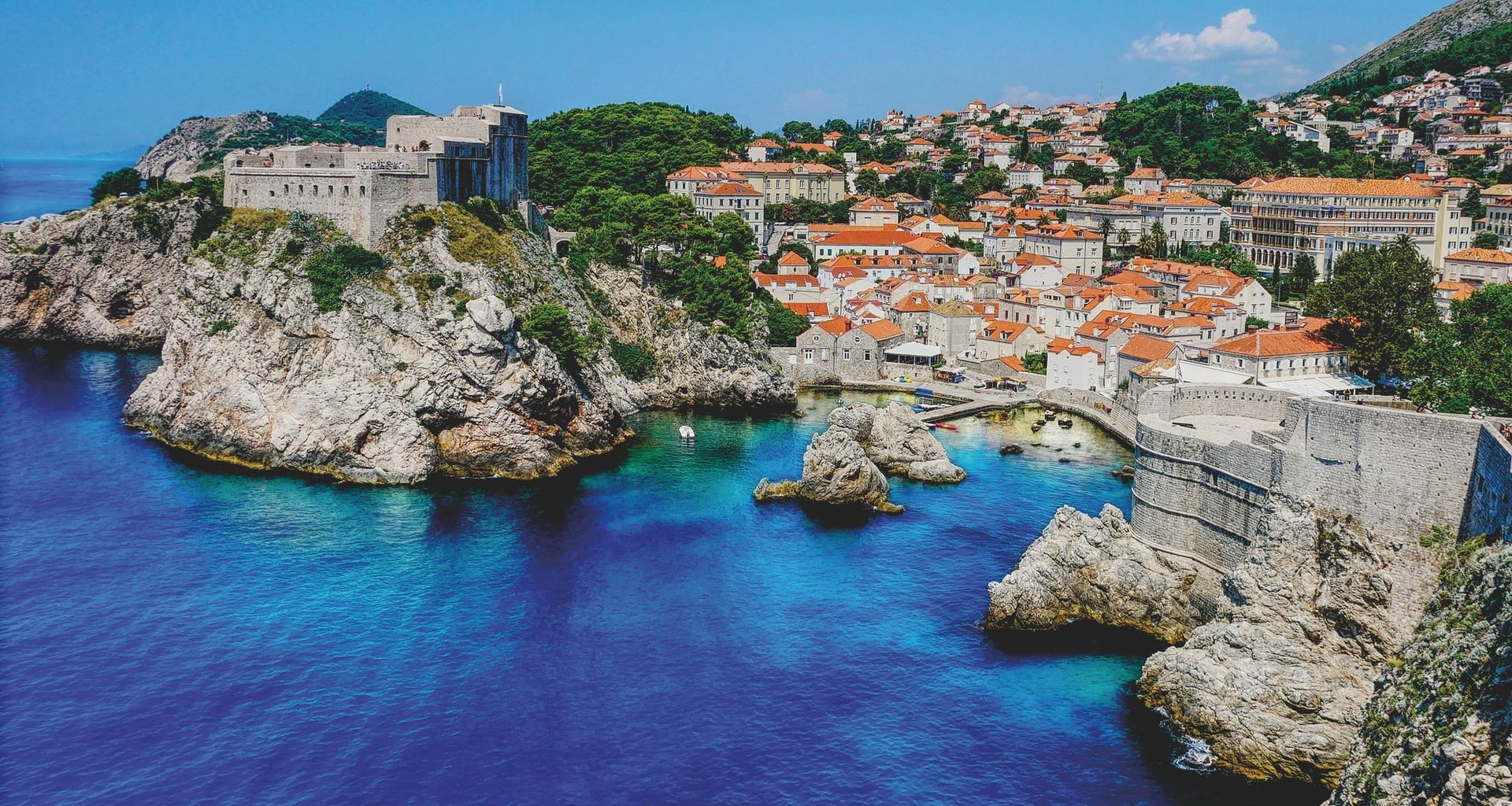 Croatia Honeymoon – Everything You Need To Know

Nestled by the Adriatic Sea, Croatia in Central Europe is a painting come alive and the perfect fantasy honeymoon destination. The beaches are white, the water azure, while cities like Dubrovnik, and their cobblestoned streets, lead you on a journey through the past. Regardless of where you are, the country of Croatia is pure eye candy.

Croatia is the filming location of the television series, Games of Thrones, with the Adriatic Sea turning into Blackwater Bay. If you are a fan, many tours will take you to all the show’s favorite sites. Put the fun in your honeymoon!

Dubrovnik, located by the Sea, is a city rich with history. It is truly the pearl of the Balkans. The city was walled-in as protection against enemies in the 9th century. Now, a walk along the top of the wall provides you with a spectacular and unforgettable view. Stroll around the city itself for a closer look at its baroque architecture.

When you are finished walking, take the cable car up Mt. Srdj. Enjoy a meal while being surrounded by one of the world’s most panoramic vistas of the city, including the many beaches.

For the ideal beach honeymoon experience, visit the island of Hvar, which has been named one of the ten greatest islands. Exciting entertainment, olive orchards, vineyards, and unsurpassed watersports await you. As for the olive gardens, Croatia might have the best selection of olive oil in the world, so this is the place to learn about the different varieties and perhaps stock up.

Another can’t-miss destination in Croatia is the city of Split. As scenic as Dubrovnik, it is easily accessible by plane, bus, or ferry and makes a good base for exploring the rest of Croatia. Split was meant to be explored on foot as you stroll to the Diocletian Palace, the Cathedral’s Bell Tower, and Jupiter’s Temple. Take a walk alongside the Mediterranean promenade and revel in the view.

Top Things to do in Croatia 👫

Croatia, that incredible pearl by the Adriatic, is best experienced by car or train. It’s a small country with an abundance of small villages that provide you with an authentic Croatian experience. The country consists of over 1,000 islands, so ferries are another easy way to explore its charms.

While Croatia is famous for its 1,800 kilometers of coastal region, inland you’ll find mountains for hiking and national parks for exploring.

Exploring the beautiful beaches is a must. A lot of the coastal region can get rocky, so here are a few pristine beaches you wouldn’t want to miss.

6.Saharun Beach is located on Dugi Otok Island and consists of a kilometer of white sand and pure waters. A forest provides exploration possibilities and shade. The beach and its bars come alive during the evening.

Be careful when discussing politics in Croatia. The country used to be a part of the Habsburg Empire. It won its independence from Yugoslavia in 1991, and said independence is crucial to all Croats. And they are remarkably assertive when the topic is broached.

Dressing well is a part of Croatian living. People go out deliberately strutting their finery. While no one will question your vacation attire, perhaps kicking it up a notch could make a good impression.

If you want to explore Croatia to the fullest, look into the Eurail Croatia Pass. This gets you to just about any destination. You can get a pass for a few days or for a week and take as many train rides as you want. It’s a great way to bring some real adventure to your honeymoon.

The most logical time to visit Croatia is during April and September. The waters are still cool in April, but they quickly warm up. By September, the summer heat is gone, and the weather is ideal for explorations. It does get crowded in July and August, when throngs of visitors flock to the beaches. Of course, these months are also the most expensive time to travel to Croatia.

After September and through May, and with the beginning of school, the tourists mostly avoid a Croatian winter.

Most of the important events, such as Zagreb’s Contemporary Music Festival and Queer Zagreb Festival, take place in the summer. The Music Festival includes concerts every night in July. In May, Croatia rivals Cannes with its own film festival.

May and June are popular months for watersports, such as sailing and swimming. The waters of the Adriatic are warm and perfect. It’s also the optimum time to go hiking in the national parks.

Croatia’s off-season begins in October, when the weather is still pleasant enough for swimming. It’s also the beginning of the rainy season. You should be able to get some excellent travel deals during this time.

Top Things to do in Croatia

Croatia has become a hot and popular tourist destination. There is simply so much fabulousness from which to choose.

Game of Thrones Tour in Dubrovnik

Even if you weren’t a fan, the Game of Thrones tour in Dubrovnik is the city’s number one tour.

Red Keep – several scenes of the Red Keep were shot at Fort Lovrjena.

King’s Landing – scenes were shot at Piles Gates, such as the killing of Sir Robert Baratheon’s child.

Wander the narrow streets and see the House of Undying, which was shot at the Minceta Fort.

The Dubrovnik’s walls appeared in Game of Thrones during several episodes.

Stradun, the city’s major thoroughfare, appeared as the Walk of Shame.

The tour is fun, and you will learn more about the show and why it was shot in Dubrovnik If a simple half-day day won’t satisfy your Game of Thrones urges, arrange a five-day tour with the Vetus Itinera Travel Agency. You will not only relive major Game of Thrones moments, but your wanderings will also take you to other major Dubrovnik tourist destinations. This tour involves full immersion into the show.

Another Game of Thrones tour can be found in the city of Split.

This is one of the oldest and loveliest national parks in Croatia. It is filled with forests, waterfalls, and lakes which create picture-postcard perfection. Research the type of trails you want to hike, then prepare for a fairytale setting – minus the big bad wolf.

All of Croatia’s coastline is fabulous, but the city of Split has several experienced sailing schools in the event you want to learn more about the sport.

There are plenty of bars and entertainment venues in Croatia, but the home of the true party animals is Zagreb. Spend an evening barhopping.

Stiniva Beach has been named as one of Europe’s finest beaches for a reason. A mere boat ride from Split, the white beach flows through high limestone walls opening up to the bluest sea.

Unlike at Plitvice, you can actually swim in these waters; or watch the fish and frogs do so. There are several waterfalls, all of them more spectacular than any picture, as are the surroundings.

Near the Lakes, you will find monasteries and several ruins worth exploring.

This Palace in Split goes back to Roman times, and it isn’t a palace at all but a fortress that housed everyone who needed it. It is a city within a city, with restaurants and shops. The Romans created a lustrous and luxurious complex of 220 buildings, complete with expensive marble and Egyptian sphinxes. Here, time has stood still, and older women still watch life from windows and hang the laundry out to dry in the fresh air.

The Croatian weather by the coast and beaches will reach 90 degrees during the summers. Occasional breezes can cool things down somewhat. May through September is considered the best times for a visit. Winters can get much chillier, but snow is very rare.

Inland, away from the coast, the weather will get colder. Winter temperatures can plummet to 20 degrees or even lower. Snow during the month of January is the norm. However, simply bundle up in a jacket and gloves and you can still revel in the beauty of Croatia. During the summer months, the temperature inland reaches the same heights as the coastal areas. If you are planning on swimming, the water temperature is more important than the outside temperature.

Equally as important as the temperature is the bura – or wind. This wind can get fierce in March, and it can make sailing a hazardous proposition. It can also close the highway between Split and Zagreb.