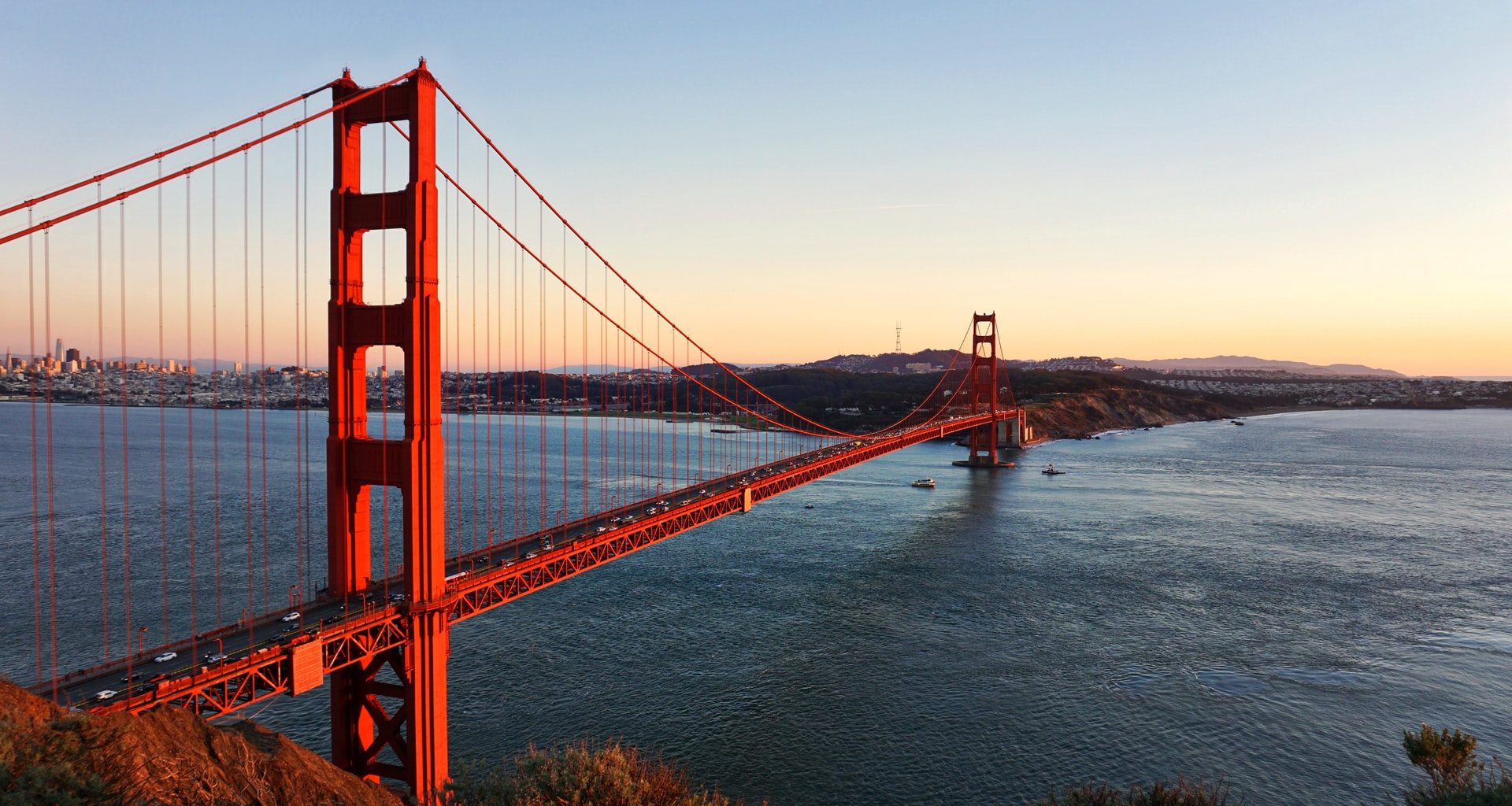 San Francisco Honeymoon – Everything You Need To Know

It’s your honeymoon, and you want everything? That is no problem when you spend your honeymoon in San Francisco. San Francisco and its surrounding area are scenic, have some of the best restaurants, and plenty of places to see and things to do. If you are planning a honeymoon with non-stop charm, San Francisco has what you are looking for.

San Francisco is a walking city. This allows you to see everything up close. Your romantic San Francisco honeymoon should begin with a stroll around the city to see the beautiful gardens in Golden Gate Park. Fisherman’s Wharf can be touristy and crowded, but you don’t want to miss the delightful sea lions who make their home on Pier 39. Enjoy a romantic picnic in Alamo Square Park, which is located across from the Painted Ladies. These Painted Ladies aren’t women of questionable virtue; they are the Victorian homes still standing from Queen Victoria’s era. Many have not survived, but seeing these colorful houses is a San Francisco treat.

The nightlife is alive and hopping in the city’s SOMA (South of Market) district. This is also the area for museums and art galleries. And you can’t miss Chinatown with its markets and souvenir shops. The food in Chinatown is the best you’ll taste outside of Beijing.

One of San Francisco’s can’t-miss landmarks is the massive Ferry Building at the end of Market Street, which is fully open only on Saturdays. Here, it’s all about food, whether you visit one of their outstanding restaurants or head straight for the popular Ferry Plaza Farmers Market. This is one of the leading markets in the country, with the best and freshest farm products. It’s where the top chefs shop on Saturdays.

The Golden Gate Bridge is, of course, one of San Francisco’s most famous landmarks. Take a stroll across and take lots of Instagram pictures.

Top Things to do in San Francisco 👫

Beautiful San Francisco is a port city in Northern California, nestled between the San Francisco Bay and the Pacific Ocean. Its mixture of sophistication and bohemian charm makes it one of the greatest destinations in the world. It has something for everyone.

San Francisco grew quickly as the California Gold Rush brought people west with hopes and dreams in the 19th century. As a port city. San Francisco has a bustling waterfront that rules the city. It is famed for its marvelous cuisine, much of which consists of fresh seafood.

A much-overlooked part of the city is Land’s End, located in the northwest part of San Francisco. This is where you leave some of the urbane sophistication behind and explore breathtaking trails, forests, and a view 200 feet above the water. The official Land’s End trail starts at the Sutro Baths and will take you from Cliff House through woody areas to Sea Cliff. The trail is about 1 mile long and provides a gorgeous view of the Bay and the Golden Bay Bridge. It also provides an astonishing sight of whales migrating through the Bay. The best chances of seeing a Humpback Whale are from May through November.

Few people think of San Francisco as a beach city, forgetting all about the three-mile expanse of Ocean Beach. Here, you can enjoy the ocean’s breezes, hungry seagulls, and the breaking surf against the dunes. It is the place for a romantic stroll. However, it has some fierce undercurrents and is not considered a swimming beach, although experienced surfers do venture out. Following your stroll down the beach, stop by one of the many restaurants lined up along Ocean Beach for an excellent meal. An excellent dining choice would be the Beach Chalet Brewery & Restaurant, where the breathtaking view matches the superb food.

Fisherman’s Wharf is a must-see destination on your San Francisco honeymoon. From here, you’ll have a view of Alcatraz Island and most of the city. There are some incomparable seafood restaurants to be found here. Getting to Fisherman’s Wharf is easy – simply take the trolley.

San Francisco has some great neighborhoods to explore, such as Russian Hill, Nob Hill, and the Mission District. Or have some fun driving down Lombard Street near the Presidio. It is known as the city’s most crooked street with its hairpin turns. Golden Gate Park offers a calm respite from urbane sophistication and a place to enjoy the city’s greenery. As San Francisco grew into a major city, it established its museums within the Park, such as the California Academy of Science and the de Young museum. Golden Gate Park is meant to entertain. Take a stroll from the Garden of Fragrance, around the lakes, the Japanese Garden, and the Shakespeare Garden. The Conservatory of Flowers has more than 1,700 different species of plants from all over the world. If you’ve seen enough flowers, head toward the beachside of the Park and visit the buffalos. Yes, these are real buffalos.

San Francisco has mild temperatures all year round. The best times to visit, however, are spring and fall, when many tourists have left. The city gets foggy in the summer and barely above freezing in the winter.

If you are visiting the Presidio, with its museums and restaurants and view of the Bay, summertime, with its extra hour of daylight, is a great time to visit.

San Francisco gets the most visitors during the months of May through September. The price for accommodations will be the highest, even though these months are not the best weather wise.

Fall and spring is the time to explore San Francisco’s outdoors. The weather is perfect for exploring, and the crowds are smaller since the kids are back in school.

Winter can get windy and rainy in San Francisco, but there are still interesting activities. The Noir City Film Festival takes place in January, with its showings of independent movies and books. For beer connoisseurs, the January Bay Area Brew Festival is just the thing, with over 200 different types of beers. Chinese New Year is celebrated with colorful floats and dragons in February.

The beer festival is followed up in February by the Francisco Chronicle Wine Competition. Wine enthusiasts get to sample the products of over 800 vineyards.

San Francisco begins preparations for the holidays in November with citywide tree lightings in Union Square, the Presidio, Ghirardelli Square, and Pier 39.

Top Things to do in San Francisco

San Francisco’s Fisherman’s Wharf is all about food and fun. Kiosks sell freshly caught seafood, and restaurants serve seafood caught the same day. This is a foodie’s paradise.

By the water, you will find the Aquarium of the Bay. This is home to 20,000 different sea creatures – see the Sevengill shark, moon jellies, river otters, and bat rays. Be sure to sign up for a backstage tour.

You will also find Madame Tussauds at Fisherman’s Wharf. Get as close as possible to your favorite celebrities and have your picture taken. Chances are if there’s someone you’d like to meet, you’ll find him or her at Madame Tussauds.

You should plan on visiting this former prison during your San Francisco honeymoon. The ferry leaves regularly from Fisherman’s Wharf. There is a museum, and the tours will enlighten guests on much of San Francisco’s criminal history. Be sure to wander around the grounds, as they offer one of the best vistas of San Francisco. Alcatraz Island is also a preserve for many birds, such as herons and gulls, who make their homes within the rock formations.

San Francisco has the most famous Chinatown outside of Beijing. You’ll find Chinese markets on Stockton Street. Move on to Grant Street for some imaginative Chinese architecture and wonderful authentic restaurants.

The Sea Lion Center is located on Pier 39 of Fisherman’s Wharf. Hundreds of these friendly animals enjoy frolicking loudly. They are fun to watch.

Extranomical Tours at 415-360-6505 hosts a nine-hour day trip to three separate wineries in Napa Valley. Pickup is from your San Francisco hotel. You will visit Castello di Amorosa, Beringer Vineyards, and Sterling Vineyards. At each winery, you will taste-test three reserved wines and learn about the art of winemaking. Castello di Amorosa is a medieval castle, complete with courtyard, moat, and towers.

Upon your return to San Francisco, you will enjoy a champagne toast before being dropped off at your hotel.

It’s an easy two-and-a-half-hour drive south from San Francisco to fabulous Big Sur via Highway 1. Prepare for some heart-pounding curves in the road and breathtaking sights of the ocean from atop the cliffs. It’s fairly isolated – no malls, banks, or traffic lights. It’s nature at its purest. The closest cities are Carmel and San Simeon, and both are worth making a side trip for. Do keep in mind that Big Sur has no cell phone service. None.

Pfeiffer Beach (with its purple sand) is the main beach at Big Sur. Stop by the Julia Pfeiffer Burns State Park and enjoy the stunning McWay waterfall. The waterfall is a 10-minute walk from the park’s parking lot.

San Francisco has a moderate temperature all year round. September, when it is the hottest, is a very comfortable 71 degrees. While a stroll on the beach is romantic and fun, San Francisco does not have “swimming” weather, even during the summer. The days can get foggy, and the evenings are quite damp. The temperature in December and January, San Francisco’s coldest months, is over 50 degrees. This is dream weather, indeed. It does rain, and the month of January gets the most precipitation at four inches.

The spring months tend to be rain-free. It’s an excellent time to visit, before the summer fog settles in.

Pack plenty of layers for your San Francisco honeymoon. Remember that with the fog comes frizzy hair. Perhaps the bride should consider bringing a cap or hat.